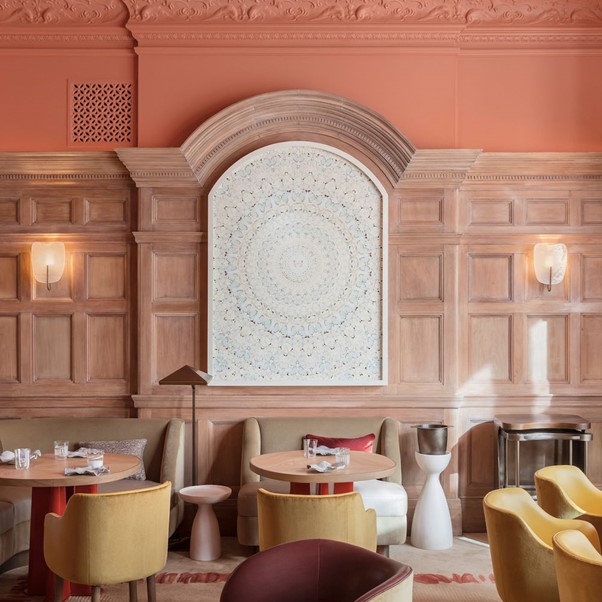 Every year, the brightest stars in the restaurant industry descend on the capital for the culinary ceremony of the year: the unveiling of the Michelin Guide. This year, the awards took place virtually, and threw up some bold new choices. Read on for the ultimate roundup of where to book for special occasion dining later in 2021…

Last night, Michelin announced the UK & Ireland establishments that have made it into the Michelin Guide Great Britain & Ireland. Usually revealed at a huge ceremony in the capital, in true 2021 style, this year’s winners were unveiled digitally – by Davina McCall and a host of big-name chefs, including Gordon Ramsay.

Each year, Michelin’s team of anonymous restaurant inspectors award venues with one star (“high-quality cooking, worth a stop”), two stars (“excellent cooking, worth a detour”) or three stars (“exceptional cuisine, worth a special journey”). This year, the capital gained two of the latter, for Core by Clare Smyth and Hélène Darroze at The Connaught. These top London restaurants join The Lecture Room & Library at Sketch, Alain Ducasse at The Dorchester,  Restaurant Gordon Ramsay in London, Heston Blumenthal’s Fat Duck and Alain Roux’s Waterside Inn in Bray, Berkshire. Accepting the award, Darroze said: “I’m thinking of all the women in the kitchen and want to let them know that everything is possible – just believe in what you are… because anything can happen.”

In other London news, three one-star establishments were upgraded to two stars: A Wong in Pimlico, Da Terra in Bethnal Green and Restaurant Story in Southwark, while seven restaurants picked up their first star. Eateries earning their first accolade include Sola in Soho, Muse by Tom Aikens and Casa Fofo in Clapton.

The evening also brought great news for restaurants across the rest of the UK & Ireland, with ten spots picking up their first star. One notable entry was Roots York, which has been awarded the city’s first Michelin star. Tommy Banks and his family launched the restaurant in 2018 alongside friend and restaurateur, Matthew Lockwood. Sister restaurant The Black Swan at Oldstead, which has retained its Michelin star since 2013, also won one of Michelin’s 23 new sustainability emblems – a green four-leaf clover – which recognises sustainable gastronomy and distinguishes restaurants taking responsibility in the conversation of resources and the protection of biodiversity. Of the 23 announced this year, four are in London: Petersham Nurseries, Silo, the Oxo Tower Brasserie and Tredwells.

The event also saw the Michelin Bib Gourmands unveiled. Named after Bibendum – the Michelin Man – the Bib Gourmand distinction “highlights restaurants offering good food at competitive prices”. This year, 16 new restaurants have made it into the 2021 Great Britain & Ireland selection, including Mo Diner in Mayfair – a newcomer from three-Michelin-starred Sketch – Sri Lankan spot Paradise in Soho and SL favourite Noto in Edinburgh.

Mentor Chef Award 2021
– Ross Lewis of Chapter One in Dublin